For these reasons, Proof American Silver Eagles, in perfect PF70 condition, signed by Rhett Jeppson, are among the most sought after and prized modern graded coins available in the market.

The American Silver Eagle is the official silver bullion coin of the United States and was first released November 24, 1986. If you are a collector of modern, perfect graded PF70 U.S. Mint coins then you owe it to yourself to shop here. We carry the complete and exclusive line of Rhett Jeppson Signed Silver American Eagle Proof Coins.

The coin pictured is only a representation of the coin you will receive, not the exact coin (serial numbers will vary).

There are no reviews yet. 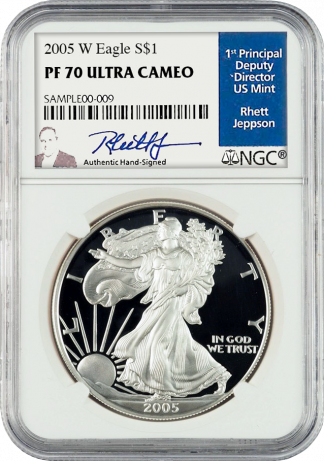